Laksa is a traditional Malaysian street food dish made from, among other ingredients, coconut milk and shrimp paste. It’s an easy-to-make broth based soup that has been enjoyed for centuries by Malaysians of all walks of life.

Laksa is a popular Malaysian street food dish that has been around since the 19th century. The recipe for laksa is a delicious combination of coconut milk, spices, and shrimp paste. 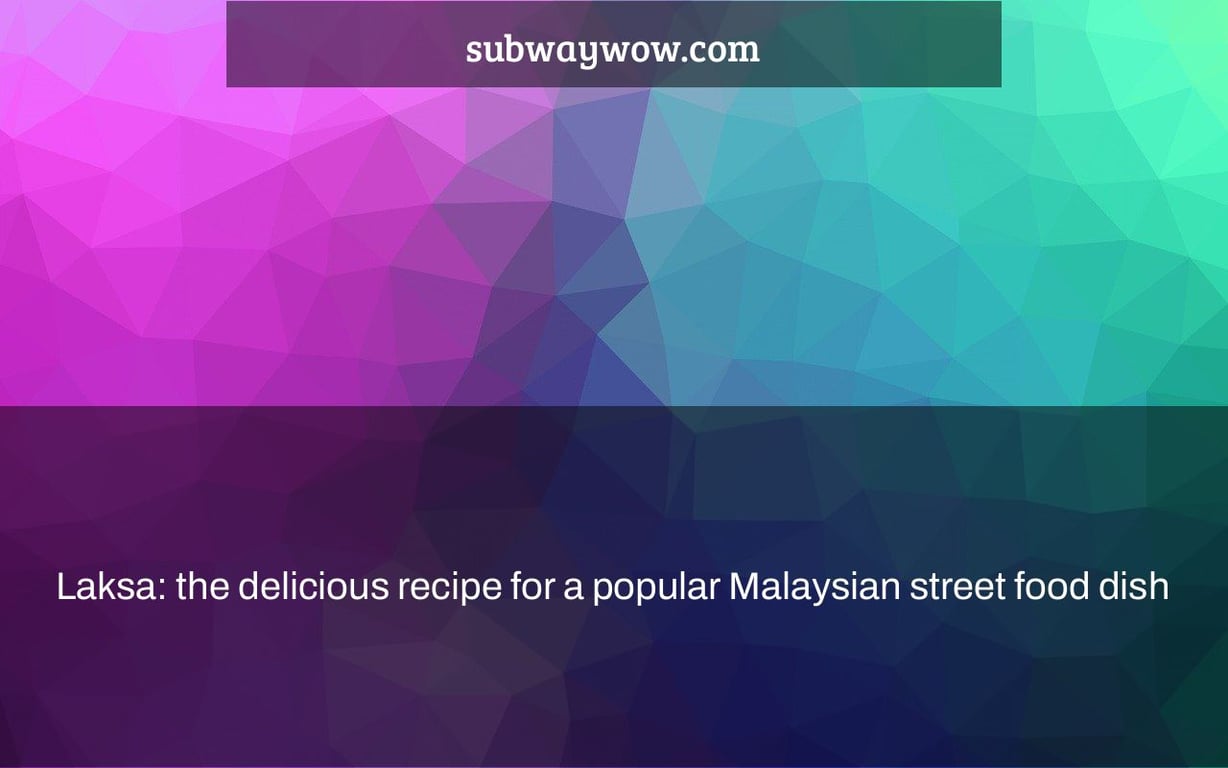 Laksa is the ideal recipe for you if you appreciate wonderfully delicious, substantial soups that are quick to cook and fantastic for feeding a family. This spicy, sour, savory laksa has it all, including a delightful coconut taste. It’s difficult to resist the mix of shrimp, chicken, and excellent, delicate noodles in a fragrant broth.

Laksa is a Malaysian street cuisine staple. It is quite popular throughout Southeast Asia, particularly in Indonesia, Singapore, and, of course, Malaysia. It has a huge following in Australia. Taste this quick laksa recipe if you want to try one of the most delicious and gratifying soups out there.

What exactly is Laksa?

Laksa is a delectable soup with shrimp, chicken, and noodles, seasoned with fragrant spices like as ginger, garlic, lemongrass, chiles, fish sauce, and, of course, laksa paste. It has its roots in Peranakan cuisine, a delectable fusion of Malaysian and Chinese flavors.

Laksa comes in a variety of flavors. Some bases use a sour base known as asam, which is often derived from tamarind. Outside of Asia, the coconut milk and curry variant is more popular. Laksa is different from curry in that it is a soup with noodles rather than a rice-based stew.

Laksa is made composed of a variety of Ingredients, which contributes to its irresistibility.

The most crucial ingredient is laksa paste, which may be found at Asian stores or ordered online.

The soup’s basis is made up of coconut milk and chicken stock.

Garlic, ginger, lemongrass, Thai chiles, and fish sauce are fragrant components that give layers of flavor to the soup.

Noodles are also required. It doesn’t matter whether you use egg noodles, vermicelli, or wheat noodles.

The major proteins in this recipe are shrimp, soy puffs, and chicken, but you may also add beef, pig, or tofu.

Bean sprouts, chopped cilantro, and shallots are used to garnish the soup.

What is Laksa Paste, exactly?

The delightful not-so-secret ingredient that serves as the foundation for laksa is laksa paste. It contains shrimp paste, dried shrimp, spices, galangal, onion, lemongrass, garlic, and other Ingredients.

It’s easier to purchase it in an Asian store or order it online, although homemade laksa paste is also possible.

It’s simple to make laksa from scratch. Season the chicken with salt and pepper before roasting it at 400°F for 40 minutes. In a saucepan, sauté the garlic and ginger while the chicken is baking. Stir in the chilies and lemongrass when the garlic has become aromatic. Sauté the mixture for approximately 3 minutes, stirring periodically. Cook for a few more minutes after adding the laksa paste and sugar.

Bring the soup to a boil with the chicken stock, coconut milk, and fish sauce. Once the water has to a boil, add the soy puffs, cover the saucepan, and cook for around 10 minutes.

Make the noodles, then divide them among four bowls (or six if serving laksa in smaller servings). Shred the chicken using two forks. Toss it in with the other Ingredients in the dishes. Lime juice should be added to the soup.

Cook the shrimp until pink and opaque, then fry the onions until crispy. Fill the dishes with the soup. Fill each bowl with a few soy puffs, then top with shrimp, shallots, bean sprouts, and cilantro. Enjoy with a squeeze of lime on the side.

How to Make the Best Laksa

If you don’t have white pepper, black pepper will suffice.

You may use several varieties of noodles in your laksa. This soup is great with thin egg noodles, vermicelli, or wheat noodles.

Any cooking fluids from the chicken should be added to the soup since they will add a lot of flavor.

If you don’t have fish sauce or don’t like the taste, salt may be used instead.

How to Keep Laksa Fresh

Allow the soup to cool slightly before transferring it to an airtight container and refrigerating it. Within three days, eat your laksa. Keep the liquid and noodles separate for optimal results.

You should also try this recipe.

to taste with salt and white pepper

Season the chicken with salt and pepper before placing it on the tray.

After 40 minutes in the oven, remove it from the oven and set it aside.

In a saucepan, sauté the garlic and ginger while the chicken bakes.

Stir in the chiles and lemongrass after 1 minute of cooking until fragrant. Cook for about 3 minutes, stirring periodically.

Cook for another 3 minutes after adding the laksa paste and sugar.

Combine the chicken stock, coconut milk, and fish sauce in a mixing bowl. Bring the liquids to a boil.

Place the soy puffs in the saucepan, cover, and cook for 10 minutes on a low heat.

Cook the noodles according to the package guidelines. Rinse the cooked noodles in water if you’re using them. They should be divided into four bowls.

Remove the skin and shred the chicken. Place it in the dishes and then whisk in any cooking juices.

Using flour, lightly coat the shallots. They should be crispy and browned after being sautéed in oil. Set place on a paper towel to drain.

Season the shrimp with salt and pepper before sautéing them until done.

Fill the dishes with the soup. Make sure there are a few soy puffs in each dish.

Add shrimp, shallots, bean sprouts, and cilantro for garnish. Serve with a wedge of lime on the side.

The skin on the chicken may be removed if desired, but it adds a lot of flavor to the meal.

Rolls of cabbage from Asia

Shrimp in a Thai coconut curry

What is the best laksa in Malaysia?

A: My answer to that question would be the laksa in Ipoh, Malaysia.

What is so special about laksa?

A: Laksa is a type of soup or curry dish from Malaysian and Indonesian cuisine. It is usually made with coconut milk, shrimp paste (belacan), chilies, galangal root, tamarind fruit extract/paste and lemongrass.

What type of dish is laksa?

A: Laksa is a type of noodle dish that often contains coconut milk, which distinguishes it from other types of Southeast Asian-style noodles.