This southern Italian yeast bread is traditionally baked in a round, but you may also find it in the shape of a cross. The dough for this particular kind of casatiello can be made with either flour or wheat berries.

Casatiello is a Neapolitan stuffed bread that is traditionally baked during Easter. The dough is filled with ricotta, eggs, and sugar. 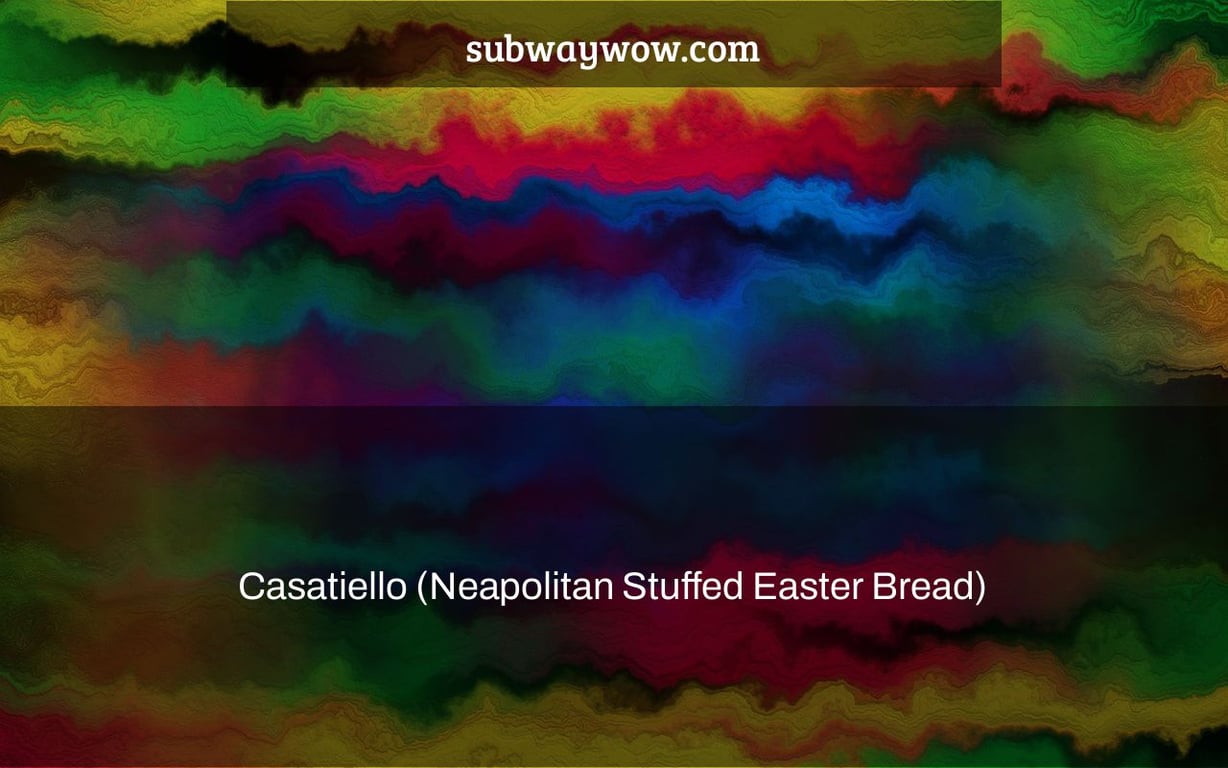 Casatiello is a popular Italian recipe for preparing filled Easter bread in Neapolitan style. It’s a savory and rich leavened doughnut bread made using water, flour, lard, brewer’s yeast, and salt in the dough. Salami, cubed ham, spicy provolone cheese, fat, and pepper make up the stuffing. The dough must be rolled out, the ingredients added, and then the dough must be rolled up and placed in a circular pan. Finally, place the eggs on the casatiello and secure them with dough strips.

The casatiello is a staple of the Easter dinner in Campania. A dough cross cages fresh ornamental eggs on top. The casatiello is distinguished from the tortano, a Neapolitan Easter bread in which hard-boiled eggs are chopped into little pieces and incorporated into the dough.

This flavorful bread keeps for a long time in the refrigerator. Casatiello is often prepared on Good Friday and served until Easter Monday. It’s normally served cold, but it may also be cooked for a few minutes in the oven before serving. This dough may also be used to make gluten-free casatiello or casatiello without fat.

The name comes from the Latin word caseus, which means “cheese” in English, and alludes to a delicious bread leavened with a considerable amount of cheese. This is a very old dish that comes from the Greek-Roman city of Naples.

Each family has its unique recipe for the pastiera (an Easter traditional Neapolitan dessert) and other traditional foods, notably the stuffing.

The processing periods will be longer if you use less brewer’s yeast, roughly 1-2 grams per hectogram of flour. Use half all-purpose flour and half Manitoba flour in this recipe. The latter has a high gluten and protein content and can survive extensive leavening with ease. The casatiello, in reality, is a dough that takes several hours of leavening and should be produced the day before and left to rise overnight, according to the traditional recipe.

If the Neapolitan casatiello does not rise, you most likely committed a mistake during the preparation.

How to make Casatiello Dough and roll it out

You may either knead the dough by hand or using a stand mixer fitted with a hook.

You may flatten the dough with a rolling pin to make an elongated form that can be wrapped up after adding the filling to make the casatiello shape. If it splits when you’re rolling it up, take a piece from the end and cover the part that has broken so the filling doesn’t escape while baking.

Place the dough in the refrigerator overnight to allow it to rise, then bring it back to room temperature before kneading.

Casatiello’s stuffing is made up of a variety of ingredients.

Various cold meats, such as ham and bacon, as well as other cheeses, such as scamorza or provola, may be added to the stuffing. The main thing to remember is to avoid using fresh or stretched curd cheeses like mozzarella. If you can’t locate the cubes baked ham, you may use bacon instead.

What is the best way to store Casatiello?

Casatiello may be kept at room temperature for up to 4 days if tightly wrapped in cling film and kept in a cool environment.

Alternatively, you may freeze it cooked with all the eggs for up to 2 months. Before freezing it, let it cool fully.

A circular pan, which is the unique mold with the distinctive donut form in order to bake the casatiello, is required for the preparation.

A circular pan, which is the unique mold with the distinctive donut form in order to bake the casatiello, is required for the preparation.

Warm the brewer’s yeast and dissolve it in it.

In the bowl of a stand mixer, combine the all-purpose flour and the dissolved brewer’s yeast. Knead in the lard, salt, and honey until the mixture is soft and uniform.

Warm the brewer’s yeast and dissolve it in it.

Transfer the dough to a work surface and knead it for a few minutes longer.

Form a ball and place it in a bowl; cover with a kitchen towel and let aside for at least 30 minutes.

In the bowl of a stand mixer, combine the all-purpose flour and the dissolved brewer’s yeast. Knead in the lard, salt, and honey until the mixture is soft and uniform.

Cut the salami and provolone cheese into about equal-sized chunks.

What is the best way to thread the casatiello?

Return the dough to the bowl and set aside a tiny portion, say around 80 grams, for the final decorating. Using a rolling pin, roll out the remaining dough.

Transfer the dough to a work surface and knead it for a few minutes longer.

Sprinkle the cubed salami, provolone cheese, and cooked ham over the top. Season with a liberal dash of pepper and a sprinkle of shredded pecorino cheese.

Roll the dough over and over again until you get a lovely loaf.

Form a ball and place it in a bowl; cover with a kitchen towel and let aside for at least 30 minutes.

Brush the dough in the round pan or a 26-centimeter-diameter donut mold with lard and close the two ends well.

Make 8 strips using the dough that has been set aside. After washing and drying the eggs, lightly press them into 5 well-spaced points. To seal the eggs, close them with strips of dough in the shape of crosses. Cover the casatiello with a clean cloth and let it to rise away from drafts for approximately 2 hours, or until it has doubled in volume.

Cut the salami and provolone cheese into about equal-sized chunks.

Brush the casatiello with the beaten egg yolk and bake for approximately 50 minutes on the lowest shelf of a static oven at 338°F/170°C. When the casatiello is done, remove it from the oven and set it aside to cool slightly before removing it from the round pan and serving it right away.

Casatiello is a Neapolitan stuffed Easter bread that has been around since the 16th century. It is made with yeast, eggs, butter and flour. The dough is then divided into small pieces and wrapped in cloth before being boiled for about an hour. Reference: casatiello napoletano giallo zafferano.