The origin of this doughnut is unclear, but the treat has been around for centuries in countries like Italy and France. The words “bombolone” or “bomboncino” mean a type of pastry made with ground almonds or hazelnuts; it could be either sweetened almond paste, ground nuts coated in sugar with egg whites added on top, or simple balls of ground almonds tossed in beaten eggs and sometimes fried.

Bomboloni are a traditional Italian pastry that is made by frying dough in hot oil, then dipping it into powdered sugar. They are also known as sfingi or cuccioli. 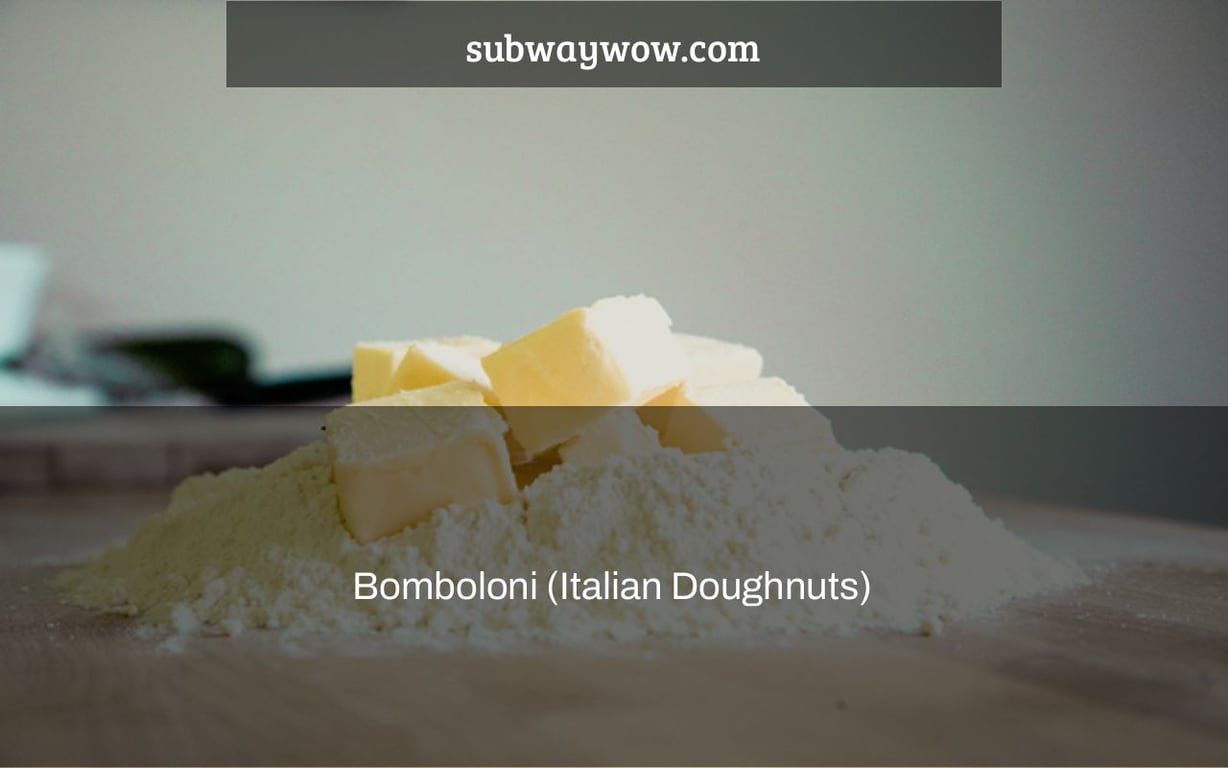 For frying, use peanut seed oil.

Bomboloni are an Italian recipe for enjoying fried filled doughnuts for breakfast or as a dessert. Super easy to make, this soft yeast dough is fried, rolled in sugar, and filled with Nutella, jam or a pastry cream.

The surface of the bomboloni is sweet and somewhat crunchy, while the center is incredibly soft and filled with an enticing chocolate filling. The word bombolone, sometimes known as bombe, means “huge bomb” since it is a true burst of taste in the tongue, similar to Berliner or Krapfen.

Italian bomboloni are made with a semi-sweet leavened dough, made with a few eggs, which after a first rest is rolled out in a rectangle and then carved into many circles. Once the discs are formed, they are briefly left to rise and then immersed in hot oil; at this point the dough will swell and take on its characteristic shape. As soon as they are drained and still hot, the bomboloni can be filled and sprinkled with powdered sugar, and then immediately eaten.

Perfect for breakfast, as an alternative to the classic croissant, they can also be enjoyed as a snack or during a sweet break.

Bomboloni are distinct from traditional doughnuts in more ways than one. Doughnuts in the United States frequently feature a hole in the middle. Italian doughnuts, on the other hand, are spherical, fried, and filled with chocolate, cream, and marmella before being coated in sugar.

You can fill bomboloni with anything you want, depending on your preferences. Custard, jam, pastry cream, chocolate Nutella spread, whipped cream, or dulce de leche may all be used to fill bomboloni.

How to Make the Best Chocolate-Filled Bomboloni Donuts

You may also bake bomboloni in the oven for a lighter version.

Allow bomboloni to cool before filling.

How to Keep Italian Bomboloni Fresh

When eating bomboloni, it’s better to eat them when they’re still hot or warm. You may keep them out of the refrigerator for 2 days without filling them, wrapped with cling film.

Filling bomboloni may be kept in the refrigerator for up to two days. It’s recommended not to put them in the freezer.

Bomboloni Italian Doughnuts: How to Make Them

At room temperature, crumble the yeast into the milk (1).

Allow for a few seconds of resting after stirring. Then combine one more until everything is totally dissolved (3).

In a large mixing bowl, combine both kinds of flour and mix well (4).

Using a fork, gradually integrate the liquid into the yeast (5).

Mix in the egg (7) as well. Finally, add the butter and season with salt.

Knead the ingredients well on a work surface (8).

Form it into a ball, set it in a dish, and wrap it with plastic wrap (9). Allow to rise for roughly two hours in a covered area, such as an oven with the light on.

When the dough has quadrupled in size, take it out (10).

Deflate it and roll it out to make a rectangle approximately 2-3 cm thick on a lightly floured work surface (11).

Cut several circles using a pastry cutter with a diameter of 6-7 cm (12).

Place them on parchment paper squares in batches to make it easier to transfer and cook them (13).

Cover the bomboloni with cling film and a tea towel and place them in a leaking pan. After then, let them to rise for approximately half an hour (14).

Fill a pan with seed oil to a height of at least three fingers (15) and heat over medium-low, steady heat.

Fill a pastry bag with the chocolate cream and a metal nozzle to puncture and fill the bomboloni in the meanwhile (16).

Dip a wooden stick into the heated oil and begin frying as soon as several tiny bubbles develop around it (17).

Allow a few bomboloni to swell in the heated oil, one at a time (18).

Turn them over and brown for a few minutes on the other side (19).

Then, as soon as they’re done, drain them on absorbent kitchen paper using a slotted spoon (20).

Fill the bomboloni by gently pressing down on the side and inserting the bag’s tip (21).

Then continue pressing and filling until you reach the first hole (22).

Place the bomboloni on a serving plate and sprinkle with powdered sugar as you go (23).

When the Italian bomboloni are still hot, serve them (24).

The “ricotta bomboloni recipe” is a traditional Italian doughnut that contains ricotta cheese and can be filled with fruit jam, chocolate ganache, or mascarpone.

What is the difference between doughnuts and bomboloni?

A: Doughnuts are made from dough, whereas bomboloni is a type of with fried bread.

A: Bomboloni is the plural form of bombolo, and refers to a type of fried dough pastry with various fillings.

Why is it called bomboloni?

A: This is a question that people have been asking for years. There are several theories on the subject, but none were proven to be true by those who know the answer.